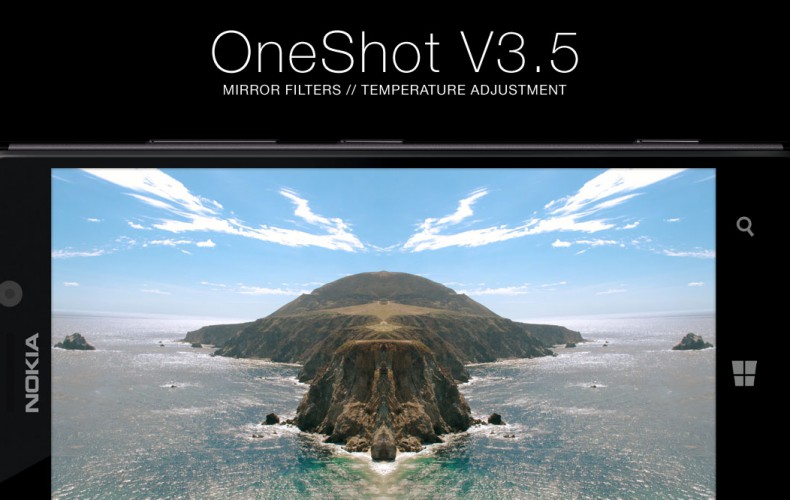 Today the next version of OneShot is available for download in the Windows Phone Store. Version 3.5 brings some very interesting improvements for photo enthusiasts.

With version 3.5 we are introducing two new categories in the sidebar, one of them is called ‘FX Fun’. Those fun effects include two new interesting mirror filters and three mono color filters (red, green and blue). The older filters Stamp, Sketch and Cartoon also moved from the FX category to the new FX Fun category.

The following image shows the usage of a mono red filter (taken with Nokia Lumia 1020):

With today’s release you are now able to adjust the image’s temperature in the viewfinder with two new sliders for the temperature and tint. Moreover, we also integrated the manual temperature adjustment in the editor so that you can get even more out of your photos after you have shot them.

Having your own favorite button is a much-loved feature of OneShot so that we added even more favorite buttons for accessing specific functions even quicker. One of them is for opening the settings menu, the other one opens the manual focus menu with one tap.

We fixed an issue when exporting photos from the editor to 6tag, today’s release also brings some bugfixes and other minor improvements.

Version 3.5 brings new features that help you taking great photos with your Windows Phone. We are also working on supporting high resolution photos (for Lumia 1020, 1520) which has been prepared, but was not ready to be included into the current release. You can expect this feature in the next update following this one shortly.

Get version 3.5 of OneShot in the Windows Phone Store: